We will become Ecumenical Mariavites

Cracow, as usually at this time of the year, is pulsing with life. The examination session has not yet ended (not for everyone, by the way; Loukas completed his education at the honorable Jagiellonian University two days ago, earning his Bachelor degree), the crowds in the streets, however, indicate that the summer tourist season has already begun. Apart from “ordinary” tourists, one’s attention is drawn by an extraordinarily high number of men wearing kippot. It’s not surprising since the Jewish Culture Festival is now taking place. The ancient synagogues in the Jewish District, Kazimierz, are filled with festival guests. We too are going tonight to welcome the Shabbat with the progressive Jewish congregation Beit Krakow, which will be lead by Rabbi Tanya Segal.

Our presence in the royal city has a special reason this time, however. This Sunday, July 3rd, at 2 pm in St. Martin Lutheran Church in Grodzka street we will be received as members of the Ecumenical Congregation of the Mariavites.

We wrote about Mariavitism more than once on our blog, and on various occasions. You 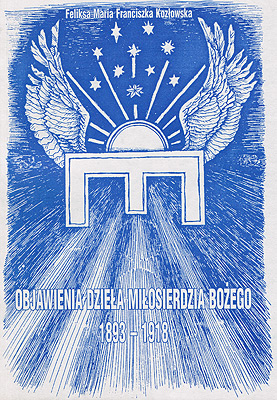 can find the posts related to it by clicking on the tag Mariavitism. Originally, it was a revival movement, born within the Roman Catholic Church. It was initiated by the revelations received by Sister Maria Franciszka Kozlowska, called “Mateczka” by the Mariavites (it’s a diminutive of the word “mother”, literally meaning “little mother”; it was used as a title for mother superior in various religions congregations of the time). The core of this movement was monastic orders. Contemporary Mariavite theologian, Rev. Deacon M. Daniel Mames, writes:

The aim of Mariavitism was to renew the religious and social life, which was based upon two pillars: the Eucharistic adoration and imitating the life of Theotokos. But, as it has often happened in history, the church authorities, instead of acknowledging a chance for the future in a new spiritual movement, became afraid and decided to put an end to it. On December 5th 1906 Maria Franciszka Kozlowska and Fr. Maria Michal Kowalski were excommunicated. Mother Maria Franciszka, by the way, was “honoured” to be the first women ever on whom the Roman Inquisition Tribunal imposed an excommunication. It was written about them then:

A poorly educated chaplain and a not-at-all educated little peasant found for themselves a seer woman from Plock.

People would accuse her of “female hysteria” or ordinary madness. Deacon Mames cites a fragment of an article by a Mariavite Sister, Maria Adela, who is right to point out that:

The anti-feministic elements were (and still are) obvious in the anti-Mariavite actions. The Roman [Catholic] Church, as an organization ruled by men, couldn’t come to terms with the fact that right and acknowledged claims about the corruption of clergy were proclaimed by a woman. In the whole anti-Mariavite action echoed the complex of a man deprived of the privilege to lead. This aspect played also an important role in the legal proceedings of the Mariavite movement before the church authorities.

Neither the papal excommunication, nor the anti-Mariavite witch-hunt, which accompanied it, was able to put an end to the new religious movement. Bishop Urs Küry, Swiss Old Catholic theologian, wrote:

Using the mediation of Russian Orthodox general A. Kireyev, the Mariavites attempted to join the Old Catholic Church. In 1909 the Rev. Jan [Maria Michal] Kowalski was consecrated as a bishop by the Archbishop of Utrecht and received into the community of the Old Catholic bishops.

The fact that the monastic spirit was fading away worried some priests. Among them were the late Fr. M. Waclaw Urbas and the priest and world renowned astronomer, Fr. Prof. [Konrad] M. Pawel Rudnicki. Also a Lutheran professor, whose name is not revealed in the sources, took part in the discussions about the Mariavite spirituality. The activity of the small Mariavite circle was welcomed with great interest of the faithful and some priests. It originated from the conviction that the Work of Great Mercy needs a Mariavite Congregation that would focus on cultivating the common prayer and the mystical spirit.

He [Rev. Zaborek] wanted to revive among the priests as well – in the new, existing circumstances – the zeal of original Mariavitism. Usually he was not understood. Or it was believed that the existing external conditions weren’t appropriate for spiritual work, or it was attempted to cultivate the Roman monastic forms from the 19th century despite the fact that the external conditions had changed. … When, in the 60s, Brother Priest [the title Mariavite priests are addressed with instead of “Reverend” or “Father”] M. Wieslaw Urbas, having concluded that the spiritual revival of the whole Mariavite clergy was temporary impossible, focused on organizing a group of several priests around himself and creating the embryo of the future, revived branch of the Mariavite Congregation, Brother Polikarp immediately became a member of this spiritually active group. In order not to give rise for gossip and not to cause a sensation, we would meet regularly on the days of the monthly adorations, which surprised no one. We prayed the hours together, concelebrated the Eucharist and studied the matters of the spirit. A serious illness, and later death of Brother Wieslaw had for some time suppressed our activity.

So it was understandable that when in 1979 – encouraged to act by two persons from outside our group – we decided to make the old group of Brother Wieslaw a new branch of the Mariavite Congregation and received appropriate permissions from Archbishop Rafael and the Presiding Bishop Tymoteusz, we held the founding chapter in Brother Polikarp’s new parish. During the session was expressed the doubt whether, grouping only about a dozen people, we were able to became a new branch of the Congregation. And then Brother Polikarp said that we were indeed only a few and we weren’t worthy to take up such a work, but if we didn’t do it, we would be to be blamed if the Mariavite Congregation disappeared in a few decades, and if we decided to act, Providence would help us. It was the decisive advice. We took it. And so during the chapter held on November 4th and 5th 1979, by permission of the then monastic superiors, was established a new, later growing in number, vital branch of the Mariavite Congregation founded in 1893.

At the moment, Christians of various denominations are members of the Congreagtion: clergy and laity, women and men. We are bound by the Eucharistic worship, the will to imitate the life of Mary, common (even though said in many different places) prayer, ecumenism. Apart from that, of course, many things divide us – we come from various traditions, we have different views on many matters. It doesn’t prevent us from drawing inspiration from the same source, which is the Holy Scripture, the tradition of the church of the first centuries and the Work of Great Mercy, as Fr. Michal Maria Kowalski called the revelation given to St. Maria Franciszka.

Visiting our blog, it is difficult not to notice that Mariavitism is something important for us, that we deal with it, that it provides us with material for reflection and inspiration. As it happens more often in life, what is important is not always easy. Some elements of the Mariavite spirituality are challenging us, which we also expressed in various posts. But why the decision about joining the Congregation?

Looking for the answer, we cannot begin otherwise than by mentioning the Minister General, Brother Pawel [Rev. Prof. K.M.P. Rudnicki]. We wouldn’t like to write a panegyric praising him, but once more we recommend the interview that he gave us. His personality, his intellect, vivid and creative approach to faith, the ability to connect people of different views and types of spirituality, the way he celebrates the liturgy, the way he preaches – this all became a bridge making it possible for both of us to “enter into Mariavitism”, and in such a way that we don’t loose anything that already belongs to our spirituality, but rather are able to add new elements to it. Rev. Prof. Rudnicki himself is a Mariavite priest, ministering for both the Mariavite churches (the Old Catholic and the Catholic one) as well as a member of the Christian Community, which is inspired by anthroposophy. During his stay in the United States he ministered as a priest in the Episcopal Church, and in the 80s, while working in the observatory in Castel Gandolfo, he celebrated the Holy Mass in Pope John Paul’s II private chapel. He also writes about himself:

I would also like very much to become a member of the Orthodox Church. But its exclusive regulations don’t allow it. Yet when there is time, I still enjoy taking part in Orthodox rituals. They brought me up to faith.

Although, as we indicated above, we aren’t writing a panegyric, it’s hard not to mention that Brother Pawel is one of the Righteous Among the Nations.

The early Mariavitism was in the first place a prayer movement. The Ecumenical Congregation managed to renew that spirit. That is why we can join a community of people who, in various places of the world, say the same prayers, and we have to admit it gives praying a special quality. We experience that every day praying together – via Skype – the Vespers from the Eucharistic Breviary of the Mariavite Congregation (for the Morning Prayer we use the Book of Common Prayer). But a special experience was the Vespers we prayed two days ago together with other members of the Congregation in Rev. Rudnicki’s home chapel. This sense of belonging to a prayer community gives one strength, especially in difficult times… When, two days ago, we celebrated the Eucharist and then recited the breviary in Brother Pawel’s house, we couldn’t resist the reflection that this is perhaps what will be the church’s future in the post-Constantinian era, that our time is not the time of big religious communities, but of such small centres of Christian spirituality scattered across the whole world, where people gather to pray, celebrate the Eucharist, give thanks, 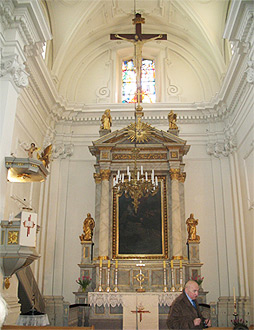 plea and intercede for others. Perhaps the point for Christians is to act together with other people, day by day, for the world to become a place where people (and not only they) can live a better, fuller life, and at the same time to gather in their relatively small (but always open to new members) circle in order to continue their spiritual work?

Last Thursday we chose our religious names – Loukas decided to take on the name Seraphim, in reference to St. Seraphim of Sarov, and Pradusz – Isaac (St. Isaac of Syria). On Sunday, during the Eucharist at St. Martin’s, where Pradusz will preach the sermon, we will take the following vows:

I, Brother Maria Seraphim (Maria Isaac), pledge before God Almighty, who is present in this Most Holy Sacrament, the Blessed Mother Maria Franciszka, the Blessed Father Francis, the Blessed Mother Clara, the Blessed Alphonsus de Liguori and all the Saints, for one (three) years to examine God’s will concerning me and fulfill it according to my best intentions and abilities, serving the Work of Great Mercy in all situations and decisions of my life.

2 Responses to We will become Ecumenical Mariavites