Anglicans and Old Catholics
Part II: There is no way towards unity, unity is a way

Swiss Old Catholic theologian, Urs Küry (1901-1976), wrote: “if we want to determine more precisely the attitude of the Old Catholic Church to the Anglican Communion, we have to start with the agreement concluded in Bonn in 1931”. Since we are writing this post on its 80th anniversary, such attitude would seem logical, but, like in the case of the history of Old Catholicism, we would like to reach deeper into the problem. As we mentioned, the Dutch Roman Catholic Church of the Old Episcopal Order (which was the official name of the “Jansenistic” church in the Netherlands) perceived Anglicans as Protestants, and, likewise, Anglicans saw their sister church rather in the Dutch Reformed Church, even though the doctrine of that church resembled in so many points Puritan teachings. Significant is what happened in Utrecht during World War II, which was a decade (!) after the conclusion of the Bonn Agreement. When the Nazis interned priest-in-charge, the local Anglican Congregation asked the Reformed Church for pastoral care, even though there were then three Old Catholic parishes in Utrecht, including the cathedral parish.

The French Jansenists were from time to time noticed by the Anglicans. Their ecclesiology, which emphasized the local church with its national characteristics, was appealing to Anglicans, but the tiny Church of Utrecht, which practiced this ecclesiology, remained rather unnoticed. It should be noted, however, that what we wrote here is naturally a great simplification, because the book “History of the So-Called Jansenist Church of Holland” suggests there was at least some interest.

However, it wasn’t the Dutch Old Catholics that initiated contact with Anglicans; it was done by German speaking representatives of the “second wave of Old Catholicism”. Old Catholic priest and church historian, Rev. Prof. Angela Berlis, wrote:

The relations between Anglicans and the German speaking Old Catholics began about 1870 when the Old Catholic movement was established as reaction to the Papal dogmas of the First Vatican Council.

The Anglican Church in England and North America followed the controversy aroused by the First Vatican Council with great interest. While the evangelical wing of the English church thought that what was shared with Old Catholics was above all the opposition to Rome, the Anglo-Catholic wing rightly suspected that Old Catholics were their spiritual kinsmen because of their adherence to the legacy of the original undivided church of the first millennium.

On the other hand, we shouldn’t idealize the Anglo-Catholic vision of Old Catholics, because, for example, the great Anglo-Catholic leader, Edward B. Pusey, feared that an agreement with Old Catholics will make reconciliation with Rome impossible, and he held it against them that they were too compliant toward the Orthodox Church.

In any case, in the first international Old Catholic conferences took part, beside representatives of the Orthodox Churches, also high-rank Anglicans. Since 1874 Reunion Conferences were held in Bonn, lead by one of the most important Old Catholic theologians, Ignaz von Döllinger. These conferences are considered the most important ecumenical events of the 19th century. All the time, however, the validity of Anglican orders was still an issue. While Döllinger himself, as well as Bishops J.H. Reinkens (Germany) and Bishop E. Herzog (Switzerland) didn’t doubt that Anglican orders were valid Catholic orders, the Dutch church was still questioning them. In the last post we wrote about estrangement between the church in the Netherlands and the German speaking communities, and the  estrangement manifested itself also in regard to Anglicanism. Bishop Urs Küry writes:

Bishop E. Herzog and Bishop J.H. Reinkens visited the Church of England many times. These personal meetings were given church sanction in 1879 in the parish church in Bern when the Scottish Bishop Cotterill, Bishop Reinkens, Bishop Herzog and Fr. Hyacinthe Loyson affirmed communion between the churches by celebrating the Eucharist together. In 1880 Bishop Herzog was invited to take part in the General Convention of the Episcopal Church. The Convention passed a resolution on the unity of Episcopate in both churches. Bishop Herzog conducted services in many Episcopal parishes and administered confirmations.

Another important step on the way to Bonn Agreement was the Lambeth Conference in 1888, and above all the Lambeth Quadrilateral, which became the foundation for further talks. However, the Dutch Old Catholics were still unwilling to accept the validity of Anglican orders. Much time had to pass, and, above all, much had to change in the Old Catholic Church in the Netherlands itself, until, in 1925, it declared “without any restrictions that the apostolic succession in the Church of England has not been interrupted”. That attitude of the Dutch to Anglicanism negatively influenced the entire relations between Old Catholics and Anglicans, especially since the Union of Utrecht was established in 1889, because its creation meant that the Old Catholic bishops would make all the important decisions together. Yet also in this relatively difficult period quite a few important events took place. One of them was the establishment of the Society of St. Willibrord in 1908 in England. The declaration of the Dutch church from 1925 meant that the last important obstacle on the way to agreement between the Union of Utrecht and the Anglican Communion was removed. On 2 July 1931 in Bonn eight delegates nominated by the Lambeth conference and four representatives of the Old Catholic churches gathered together. In the morning took place mutual survey of the delegates. Old Catholics asked Anglicans about the authority of the Lambeth Conference and the 39 Articles of the Church of England, whereas Anglicans were asking about the authority of Scripture and the understanding of Eucharist. Already in the afternoon a draft of what was to be remembered as the Bonn Agreement was prepared. The final version was as follows: 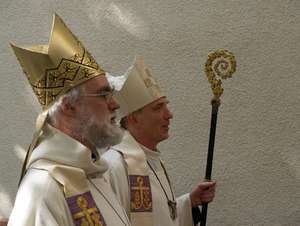 On 7 September 1931 the International Old Catholic Bishops’ Conference accepted the agreement and on 20-21 January 1932 took place the ratification by the Convocations of Canterbury and York.

In the discussions we sometimes have on the internet, especially with Roman Catholics, we often hear that the Bonn Agreement has not lead to full unity of the Anglican and Old Catholic churches. Of course, here comes up the question what is “full unity”. It was broadly discussed by Bishop Pierre Whalon in his sermon for the 80th anniversary celebration of the Bonn Agreement. At the foundation of the vision of unity Bishop Pierre presents there is the Trinitarian vision of the church (which we also know from Orthodox theology):

The few words of the Bonn Agreement point to the kind of unity we share. It is not a monad, under one bishop who tells the rest of us what to believe and how to act. It is an image — albeit a very pale and feeble image — of the life we share in the Triune God. The Three have each a separate identity, yet they are perfectly one. 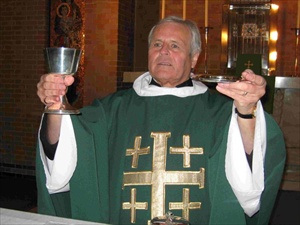 Anglican Eucharist in the Old Catholic cathedral in Haarlem

The Anglican-Old Catholic unity is one in a relationship, and a relationship is something we have to keep dynamic. This unity is a way we have to go together; a process of growth. Of course, we shouldn’t abuse that vision to conceal the fact that there are still problems and difficulties. The Bonn Agreement is very generic and doesn’t contain any executive rules; in other words, we know we are one, but we not always know how to be one. Despite this, that unity is a fact. Today we attended Anglican Service of Holy Communion which took place in the Old Catholic Cathedral in Haarlem. Since the local Anglicans don’t have their own priest-in-charge now, the service was lead by a reader who distributed bread and wine previously consecrated during the Old Catholic Mass in the morning. “Though we are many [and different] we are one body, because we all share in one bread”….

For further reading we recommend you the lecture given by the Archbishop of Canterbury, Dr. Rowan Williams, for the 75th anniversary of the Agreement and the book “Building on the Bonn Agreement: An historical study of Anglican-Old Catholic relations before and after the 1931 Bonn Agreement with special reference to the Anglican-Old Catholic Theologians Conferences 1957-2005” we wrote about last year here.