Christmas is slowly nearing an end – at least in Western Christianity, for our brothers and sisters in the East still await it. We thought that this reflection can be a sort of summary for the first and a sort of preparation or foretaste for the latter. Jarek (I suppose it’s time to stop using the blog pseudonym Pradusz) preached it twice: first on Christmas Eve in the Kritische Gemeente IJmond, and slightly modified on the following day in the Parklaankerk in Driebergen. Our translation combines both versions. We would also like to recommend a few texts that were an inspiration for this reflection. These are: Advent and Christmas messages of the Presiding Bishop Katharine Jefferts Schori, the Rev. Jason Byassee’s article What about Mary? and the reflections of a Muslim mystic The Blessed Virgin or About the Receptivity of the Soul. The most direct source of inspiration was however this poem by the 17th century mystical poet Angelus Silesius:

“If Christ were born in Bethlehem a thousand times and not in thee thyself; then art thou lost eternally.”

I like reading women’s magazines. I believe they broaden one’s horizons; in any case if one is a guy. And they are usually an

enjoyable reading. But sometimes I’m deeply ashamed when I read confessions such as this one written by a young mother: “As long as I was pregnant I felt acknowledged and loved. Now when my child was born I realized that it wasn’t about me. I was only a wrapping for the gift everyone awaited. And what do you do with such a thing? At best you put it away until next time.” It’s sad that there are still women who experience something like this, also in our country – so proud of its progress with regard to emancipation. Yet I wouldn’t be a theologian and preacher if another reflection didn’t come to my mind apart from this hardly original one. Don’t we all do something like this at Christmas? Among Catholics and the Orthodox it certainly happens less often, but among Protestants it seems obvious: “Nu zijt wellekome Jesu lieve Heer” (Be Welcome Dear Lord Jesus – the title of the oldest Dutch Christmas carol; you can listen to it for example here). And what about Mary? She can again dissolve into the background after a “well-done job.” Typical? Yes, typical indeed for a patriarchal society. But we’re supposed to have left it behind…

The hymn sung by her after she visited the future mother of John the Baptism (Magnificat) says: “all generations shall call her blessed,” her, an unknown girl from Nazareth, as unimportant as only such a girl could be. It was supposed to be our task to commemorate her in protest against the world where such girls don’t matter; to signify our hope that a different world is possible, to signify our modest contribution in fulfilling the dream she shares with us in this hymn, the dream about exalting the humble and feeding the hungry. The dream where she has a place as well – and not an insignificant one…

We reminded today the story where Mary hears from the angel that she found grace in the eyes of the Lord. But I would like to protest against all those translations which weaken the meaning of the Greek word KECHARITOMENE. It doesn’t only mean that Mary found grace with God. This word is used only once in the whole Bible and actually cannot be translated otherwise than as FULL OF GRACE, completely filled with grace. You can of course try and find other translations for the word “grace.” You can say “gift,” love,” “expectation,” “hope,” future.” Personally I like reminding in this context that God’s gift is God himself. Mary is full of the presence of the Living One. She is its bearer – greater than the most famous prophets, than everyone else in the whole story of her people and their God.

In a somehow different way it is expressed by a story taken from one of those gospels which didn’t find their way into the canon of the New Testament, the Gospel of James. Its author writes that the young Miriam of Nazareth was one of the girls given to the temple. They stayed there until puberty, were schooled by priests and did various chores. One one the most important ones was weaving and decorating the curtain which was to hang before the most holy place in the temple, the place where the Living One himself was present – as Shekhinah, the divine presence among people; as Chokmah, the divine wisdom, which built itself a palace on earth according to the Old Testament. It is there that the encounter of God and the human being took place once a year on the Day of Atonement – Yom Kippur. Nowhere was God as near as there…

There is also a tradition which says that Mary, when she had to leave the temple, as it were took with herself or upon herself this divine presence, which was by the way always seen as feminine (both Shekhinah and Chokmah are feminine nouns), and became the temple herself. I realize that this sound quite abstract. So let’s try to express it otherwise. When we say that it’s difficult for us to believe in God that resides somewhere above the clouds, when we say that we don’t look for him in the one and only temple, one and only religion, but experience his/her presence deep within ourselves, in our own existence, we express something essentially present already in this old tradition. The place where the divine meets the human, where God becomes for us true and trustworthy, is in the human being and among people. As expressed by one of Huub Oosterhuis’ older hymns:

“Not in the tomb of the past,
not in the temple of dreams,
but here among us is he,
here in the shadow of hope.
Here in this dying existence he becomes trustworthy for us
we become God’s people
– love to death and life.”

Do we become “God’s people?” I think Mary’s encounter with the angel is about this very question. I interpret this story as a poetical description of the moment when she realized that she is the bearer of “the divine spark,” the living Word coming from the source which is the Living One himself. It is proclaimed to her in the form of a message from the depths of her own consciousness and from the collective consciousness of her people, and perhaps the whole humanity. Yet she has to say YES to it, has to confirm this message. And she does. Not without doubts, not without additional questions, for she’s no submissive and obedient maid. She asks for explanation how it’s possible. But then she says her YES and from that yes, from that “Here am I, the servant of the Lord” everything begins. The divine meets the human. The Word of the Living One receives human hands and feet, and we become the people of God who wills nothing more than to become a human being, as human as possible, continuing the best tradition of Israel’s glorious stories about God who sets out on a journey with his people, who takes the side of the widow and the orphan, and brings justice to those who are deprived of all rights. It happens here in this dying existence and it goes beyond it towards the future 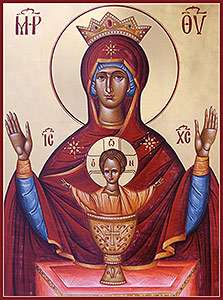 which no one has seen, no one has suspected, which exceeds all our expectations and dreams…

Usually I wish you a blessed Christmas at this point. Today however I would like to put these wishes otherwise. I wish you a blessed fulfillment of the Annunciation. I wish us all that we refer the words of this annunciation to ourselves and others around us: “And behold, thou shalt conceive in thy womb and bring forth a Son, and shalt call His name Jesus. He shall be great and shall be called the Son of the Highest.” Let us celebrate the birth, the birth of God with us, God in us, let us look on ourselves and people around us as the most precious, dearest bearers of the divine mystery here on earth. Bearers of hope, bearers of the future, the most beautiful Christmas gifts we can dream of. In a while, as we agreed with today’s celebrant, there will be silence. But I would like to fill this silence with words I see everyday this week whenever I turn on my computer. They come from Rudolf Steiner, the founder of Anthroposophy. They are not easy. You will most likely have to “chew on them” for some time, so please take them with you:

“I feel as though a spell were lifted
from the spirit-child in the womb of my soul;
in the brightness of my heart
the holy word directed to the world
brings to life the heavenly fruit of hope,
which joyfully grows towards the far places of the world
upon the divine ground of my own being”…