Smells and bells and… socialism.

We recently added a new link to the growing collection of web resources that interested and inspired us, namely to www.anglocatholicsocialism.org.

A strange collation? Anglo-Catholicism is about (Neo)Gothic cathedrals and (Neo)Baroque 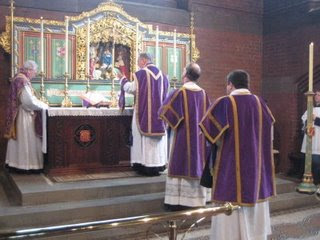 churches, a rich old-fashioned liturgy, the proverbial “smells and bells”, isn’t it? It’s an ecclesiogical-liturgical fairy tale about the “new Middle Ages” that inevitably contains something of an escapist’s attitude. A little bit like the Church equivalent of the British court ceremonial that pretends to be “ancient” being in fact invented in the 19th century.

Of course, if someone argued that it’s all that can be said about Anglo-Catholicism, they would immediately have to face us and, I swear on my “cathedral” surplice bought in Britain, sparks would flow in heated polemics. On the other hand it’s impossible to pretend that the above description is so utterly untrue. On the contrary…

There is no sense denying that the Tractarians of 19th century (Newman, Keble, Pusey and others), known also as the “Oxford Movement” (more about them is to be found, among other sources, on these websites www.victorianweb.org/religion/herb7.html, www.victorianweb.org/religion/tractarian.html, www.justus.anglican.org/resources/bio/249.html), seemed sometimes like irrepressible romantics and used to have tendencies to idealization and aestheticism in what they wanted to remind the Church of England about: it’s pre-Reformation, Catholic roots reaching deeply into the “undivided Church of the first centuries.” Their challenge for the protestantised and bourgeois Anglicanism of the Victorian Era, however, had an enormous impact on that Church: its self-knowledge, self-consciousness, its doctrine, theology, spirituality and approach to ecumenism. One doesn’t necessarily have to be an Anglo-Catholic to feel as a grateful heir of this spiritual current, because much of what it postulated became simply “common Anglican heritage”. It’s in a great degree thanks to it that nowadays we don’t speak of  PECUSA (The Protestant Episcopal Church of the USA), but of ECUSA (The Episcopal Church of the USA), which doesn’t give evidence of any “betrayal” of the Protestant, Reformation roots, but testifies in fact that they have been treated seriously. The 16th century Reformation hasn’t ever aimed at creating a new Church, but at renewing Christianity in the spirit of return to its biblical and early-Christian sources!

Anglicanism has been, from it’s beginning, a peculiar Reformation movement, more than the continental ones aware of it’s roots being in the past and more than them (maybe except for only Scandinavian Lutheranism) willing to maintain continuity with the past. And these were the “Tractarians” who equipped this peculiarity in a solid theological base – in a new situation, facing new spiritual and intellectual challenges that the 19th century brought.

Not many people associate Anglo-Catholicism with terms like “renewal”, “transformation”, let alone “revolution”. On the contrary: we can often sense a scent of naphthalene (apart from incense) spreading around it, as if from grandma’s old laces (and there is no shortage of laces either!). And nonetheless… a Polish philosopher, Wladyslaw Tatarkiewicz, in his “History of Philosophy” placed a paragraph about John Henry Newman next to a paragraph about S.A. Kierkegaard, the rebelliously “unadjusted” reviver of Danish Lutheranism and the precursor of existential philosophy. The Danish super-Protestant had at least one thing in common with the Anglican convert: they both couldn’t stand the 19th century Christianity: lukewarm, void of any kind of risk and drained of any critical dynamism. Christianity of  well-fed, self-satisfied petty bourgeois

Bishop F. Weston (in the middle)

But neither Kierkegaard nor Newman were revolutionists in the sociopolitical sense. Their attitude to socialism that was about to be borne, was, euphemistically speaking, critical. And it’s true that the popular point of view doesn’t associate Anglo-Catholicism  socialism. We ought to be all the more grateful to the authors of the website www.anglocatholicsocialism.org for revealing also this aspect of it.

One of the fundamental features of Anglo-Catholicism is its sense of relation with “the undivided Church of the first centuries”, manifested among other things in frequent and voluminous references to the patristic tradition. At www.anglocatholicsocialism.org you can also find a section containing, among other things, quotations from the Teachers of the Faith on social issues. And here are a few, perhaps as a contribution to an examination of conscience. More is to be find on the same website (the section “Traditional Values”). We encourage you to read and reflect upon that.

God who creates and gives life to all human beings wants them to be equal. He put us all into the same condition of life; he made us capable of wisdom; he promised immortality to all; he excluded no one from the heavenly benefits . . . With him no one is master, no one is slave. For if he is the same father to all, we are all free by equal right.

It is not for lack of miracles that the church is stagnant; it is because we have forsaken the angelic life of Pentecost, and fallen back on private property. If we lived as they did, with all things common, we should soon convert the whole world without any need of miracles at all.”

“For ‘mine’ and ‘thine’ — those chilly words which introduce innumerable wars into the world — should be eliminated from that holy Church . . .The poor would not envy the rich because there would be no rich. Neither would the poor be despised by the rich, for there would be no poor. All things would be in common.

When we administer any necessities to the poor, we give them their own; we do not bestow our goods upon them. We do not fulfill the works of mercy; we discharge the debt of justice . . . what is given to us by a common God is only rightly used when those who have received it use it in common.

This entry was posted in English entries and tagged Anglo-Catholicism, Church Fathers, Leftism. Bookmark the permalink.

2 Responses to Smells and bells and… socialism.