“A Christian should have no doubts,”
or “Where they burn books…”

…so too will they in the end burn human beings.” These famous words come from the great German poet Heinrich Heine. Spoken by a character in his play “Almansor,” they are related to the burning of the Q’ran by the Spanish Inquisition. The play was written in 1821. Only a little over a hundred years later the Nazis fed Heine’s books to the flames and his prophecy was fulfilled. Shortly thereafter furnaces in concentration camps were ablaze…

We realize that we should be careful with such associations. An easy comparison to the terror of the Inquisition and – the incomparably more tragic – crimes of national socialism can lead to a trivialization of evil and over time make us lose any sense of proportion. And yet we admit that it’s difficult to resist such comparisons when we see Tomasz Terlikowski first chopping Swiatoslaw Nowicki’s and Magdalena Walulik’s book “Tarot 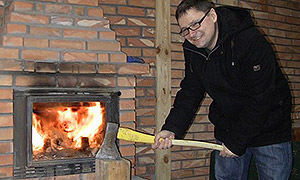 Apokalipsy” (“Tarot of the Apocalypse”) into pieces and then throwing it, together with the Tarot cards that came with it, into the fire place.

What happened? Światosław – a philosopher, known scholar of Hegel, esoteric, astrologist and, which we fondly admit, our friend – sent a copy of his book to the Polish conservative Catholic website Fronda.pl, which caused a commotion among the editors. The “Frondists” consulted Br. Marcin Radomski, OFMCap. His reaction, as quoted on the website, can hardly be considered anything less than shocking. Its first words are: “A Christian should have no doubts: Tarot cards may and should be burned as related to the worship of evil.” How to comment such a statement?

Let’s begin with Tarot itself. Its career in the European culture was extraordinary at the very least. The Catholic theologian Cardinal Hans Urs von Balthasar writes:

The origin of the Tarot is obscure, as is the historical background of its symbols … The attempt to trace them back to Egyptian or Chaldean wisdom remains fantastic, whilst to explain the use and spread of the cards by way of wandering gypsies is plausible. The oldest surviving cards date from the end of the 14th century. Correspondences between the Tarot symbols and the Cabbala, astrology and the Hebrew alphabet were established relatively late, towards the end of the 18th century – supposedly first of all by the French archaeologist Court de Gebelin (1728-1784).

As you can see, the cardinal of the Holy Church of Rome and one of the most prominent Roman Catholic theologians of the past century had quite a few doubts about the Tarot. In the same text however, which is the afterword for Valentin Tomberg’s book “Meditation of the Tarot” (we posted an excerpt from the book here), von Balthasar emphasizes that “repeated attempts have been made to accommodate the Cabbala and the Tarot to Catholic teaching.” Undoubtedly one of the most important and original attempts was Tomberg’s book itself. Let’s quote some comments about it. Abbot Basil Pennington, OCSO writes: “It is without doubt the most extraordinary work I have ever read. It has tremendous spiritual depth and insight.” Another Trappist, Abbot Thomas Keating, OCSO called it “the greatest contribution to date toward the rediscovery and renewal of the Christian contemplative tradition of the Fathers of the Church and the High Middle Ages.” Maybe the most telling was the remark of the famous Benedictine, Fr. Bede Griffiths, who called the “Meditation” “the last word of wisdom.” All these things were said, let us remind once again, about a book which taken up the most fundamental themes of the Christian faith and spirituality using the symbolism of the Tarot. Is any better proof needed to show that Br. Radmoski, who relates Tarot only to the worship of evil, doesn’t know what he is talking about?

But the problem is bigger than just the Christian attitude to the Tarot and, more broadly, to the esoteric tradition. We were most shocked by Br. Radomski’s claim that a Christian should not have any doubts. It makes us want to ask what Christianity is for him actually. Is it still faith or rather an extremely dogmatic ideology? And here comes another association – with the recent letter of the Polish bishops about “the gender ideology.” There too religion becomes an ideology fighting other ideologies. We think that it is not sensible to debate such views. But without doubt we should counter them with a vision of our own. Defining the term “comprehensiveness,” Urban T. Holmes III writes in his book “What is Anglicanism” about the “priority of a dialectic quest over precision and immediate closure.” He advocates “[a] sense of community of thought as opposed to a well-defined, definitive position.” We too describe our faith like that, and probably not only because we are Anglican, even though it was in Anglicanism that we found a place to experience and share it with people of a similar attitude (however often of very different opinions). Doubts are an inseparable part of faith thus understood. They protect us from definitive positions, which makes it clear that the last word is not ours.

Seeing Tomasz Terlikowski, whom we know also as translator of great books of Russian religious thinkers, author of insightful articles in the journal “Semper Reformanda,” a keen observer and commentator of reality, in the role of an amateur inquisitor is not only very painful and shame-inducing when we realize that in the eyes of some he represents the Christian attitude. This sad and horrifying film makes us aware once more that something bad is happening in the church, that some Christians – afraid of the world and less and less able to initiate dialogue with it – are destroying the best cultural traditions of Christianity and replacing them with an aggressive sectarianism.

Obviously this scene is also simple buffoonish foolishness meant to achieve the short-term goal of tightening the ranks in the fight against all possible perils: secularization, gender, homosexuality, leftism and the esoteric. Realizing this is hopeful – in the first place because this time Heinirch Heine’s prophecy perhaps won’t come true. The Fronda boys are most probably not fit for true inquisitors. What will happen, however, if the war banner will be taken over by others, more determined and unscrupulous? In the history of the world it happened more than once that what began with apparently innocent foolishness ended with tragedy…

* We learned from his own comment on Facebook that – contrary to the suggestion on Fronda.pl – it wasn’t Swiatosław Florian Nowicki who sent his book to the website.

This entry was posted in English entries and tagged reflections, Valentin Tomberg. Bookmark the permalink.

One Response to “A Christian should have no doubts,”
or “Where they burn books…”