This is the second reflection I wrote for the website tezeusz.pl (here you can find info about it in English) upon today’s readings. It is a part of their “online retreat” series for Lent.

Although I was taught not to mix narratives of different Evangelists, I cannot help but turn to Johan Sebastian Bach’s “St Matthew Passion” when reading John’s announcement of 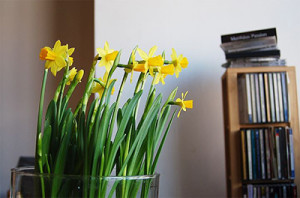 Judas’ treason. I associate Lent inextricably with two things: my favorite daffodils blossoming and the “Passion” of Bach – “the fifth Evangelist.” (Here you can listen to one of my favorite renditions – conducted by Stephen Cleobury.)

So also this time I read John’s story with Bach’s masterpiece sounding in my ears, even though the cantor from Leipzig wrote also “St John’s Passion,” which however never fascinated me in the same degree. ..

Listening to the “Passion” used to be for me in the first place a family event – a certain household ritual. In his modest record collection my grandpa had a recording of the “Passion” conducted by Günther Ramin in 1941. Later when I learned about various complexities of history, I imagined the boys from the magnificent St Thomas Choir in Leipzig that sang it wearing Hitlerjugend uniforms, which made the experience even more dreadful. Today I know that the Choir management succeeded in obtaining an exemption from membership in this organization for the singers, but it surely wasn’t able to isolate the boys completely from the influence of the ideological poison which penetrated all areas of life in the III Reich. What did they think when expressing by song the indignation and wrath at the traitor? (With the same passion and bravura as their successors in this recording from the 1990s?)

Did they associate “das mördische Blut” (“the murderous blood”) with the refrain of the nazi song they must have heard multiple times?

(“Sharpen the long knives on the pavement,
let the knives slip into the Jew’s body.

Blood must flow, a whole lot of it,
and we shit on the freedom of this Jew Republic.”)

Not without a reason the Good Friday was a terrifying day for European Jewish communities. The fanatic “Christian” mob would organize bloody pogroms – heated by anti-Jewish messages that were abundant in liturgies, sermons and folk “Passion plays.”  Why do I write about this? Because I believe that we must never stop reminding ourselves that religion not only doesn’t protect against committing horrible crimes, but often induces them. Although there is surely a vast quality difference between Martin Luther’s anti-Judaism and the atrocious anti-Semitism of the national socialists, in practice the first undoubtedly often transformed easily into the latter. Did the magnificent chorals of the “Passion,” rediscovered by the German composer of Jewish descent, Felix Mendelssohn-Bartholdy, prepare the ground for songs about slipping knives “in den Judenleib?” We could have a very long discussion about this. But regardless of the outcome of this discussion, I think we can make one conclusion. Religiosity, regardless of how deep and genuine it is, doesn’t guarantee that people will act in a humane manner. When depraved of the humanistic element, the awareness that the human being – and their commonwealth – is indeed the “measure of all things,” it may initiate crimes. Not only doesn’t religion protect against anything. It also needs a “humanistic correction” itself – continuous reminding that it is the face of the other in all its openness and vulnerability that reveals God to us, constantly pleading: DON’T KILL ME, DON’T HURT ME, like Emmanuel Levinas emphasized. I think, by the way, that it’s a good topic for Lenten reflections and examination of conscience. And I think it may have more to do with the story of Judas’ and his treason than we would suspect at the first glance…

Regardless of all these remarks and reflections, I’ve always seen the “Passion” as something personal. Especially after the death of my grandparents it sounded “only for me,” like daffodils blossomed “only for me” on my birthday in April. How great was my surprise when I realized after moving to Holland that here it is listened (and often sang) by… almost everyone, completely irrespective of their worldview. In a country where people asked about their denomination most often respond with “I’m nothing” or “I’m pagan,” millions go each year to concern halls and churches in order to listen to the “Passion” for three hours, and thousands take up the discipline of rehearsing for many months in order to take part in one of the multiple amateur renditions in the country. (Even if they don’t sound so perfectly as this wonderful version conducted by Tom Koopman, of course.) This way, through the “fifth Evangelist” and the admirers of his masterpiece, its Gospel message truly becomes “a light for the Gentiles” (see Isaiah 49,6),  demonstrating at the same time that Jesus Christ and his story don’t belong to any single religious or church tradition. The experience of performing the “Passion” with people who in a large part don’t have and don’t won’t to have anything to do with institutional Christianity, and still experience it in a very profound manner, is a great medicine for imposing any limits on Him. He will always destroy the limits from within – for example by the power of Bach’s music. A Dutch journalist who died a few years ago, Martin van Amerongen – a typical example of a left wing liberal intellectual (“to make it even worse” of Jewish descent), so a kind of a wicked wizard from fairytales for very naughty kids told by the religious right of all kinds – was a great expert in Bach’s works. He told an interesting story in his great essay about the “Passion.” For decades the best known Dutch rendition of Bach’s masterpiece was the “Passion” (performed with great solemnity and pathos) conducted by Willem Mengelberg. (You can listen to it here.) The performance began at 7:30 pm on Fridays. Amsterdam Jews would celebrate then the beginning of Sabbath at the near Synagogue. Immediately after the service they would go to the concert hall – with the rabbi and cantor leading them – to listen to the “Passion.” Although they were always late for the first choral, they made it before the first recitative of the Evangelist…

As we talk about the universal character of the story of Jesus, we have to say that the topic of treason is among the most universal themes it contains. I don’t know if there is anyone who can say that they never betrayed anyone or anything: somebody else, oneself, some conviction. Perhaps my vision of the human condition is overly pessimistic, but I honestly doubt that’s the case. In any case I cannot say this about myself. Bach, together with his lyrics writer (for Mr. Picander, in everyday life the head of the Leipzig post office, doesn’t rather merit the title of a poet), found a sophisticated way to emphasize that no listener should think the story is not about them. When Jesus proclaims that one of the present will betray him, the question “Lord, is it me?” is asked eleven times. Only Judas doesn’t ask it. He will do it a bit later. But even before he brings himself to ask the question, the choir already has the answer – in the choral “Ich bin’s, ich sollte büssen.” (“It’s me, it’s me who should be punished,” which can be found here.)
Like in Greek tragedies, the choir speaks here on behalf of us all and on behalf of us all confesses guilt. This confession gives a peculiar dimension to the outburst of wrath at the traitor (“’Sind Blitze, sind Donner in Wolken verschwunden?”) which I mentioned at the beginning, but which comes a little later in the “Passion”, after the arrest of Jesus. When the choir calls for hell to open its abyss and devour Judas, in the light of the earlier confession of guilt it calls… for itself to be punished (and thus for us all). The natural mechanism of looking for a “scape goat” often obscures this. It’s the “others” who are always guilty: the Jews, the Muslims, the liberals, the Freemasons, the left or the right wing. Yet Bach and Picander try their best to make this impossible for us. It is us in the dock. Moreover, we are pleading guilty…

This makes it all the more important to ask the question which has been bothering me for many years: WHAT ACTUALLY DID JUDAS’ TREASON CONSIST IN? Judas brought the servants of the archpriest to the Garden of Olives, where Jesus was praying, and pointed him with a kiss. A dramatic moment, certainly, but, from the point of view of the logic of the story, was it truly necessary? For Jesus wasn’t unknown. Recognizing him, even in the dark, wouldn’t be that difficult.

Another, perhaps more important question is WHAT MADE JUDAS DO IT? In any case not greed. The infamous 30 pieces of silver were worth so little that they look more like an excuse than a true motive for treason. So what was it REALLY about?

Personally I don’t ascribe low motives to Judas (such as for instance Peter’s when he denied Jesus out of simple fear).  I see him rather as someone completely devoted to his Master and unfalteringly believing in his power. His attitude is the attitude we often identify with true faith, unfortunately: based on the conviction that God is almighty and everything will be well if it only pleases him to “turn to action,” like at the touch of a magic wand. And this is what Judas tries to cause: Jesus, the Messiah of God, should finally start acting. Confronted with the might of the archpriest he will finally have to use his own might and crash his servants. For aren’t there in the Bible visions of a vengeful God turning into dust the enemies of the chosen people? Judas not so much betrays as provokes – to action. His desperate deed is in reality a cry: “DO SOMETHING FINALLY, DEMONSTRATE YOUR MIGHT!” How deep must his disappointment have been when he realized his plan failed. Jesus let himself be arrested and led “like a lamb to the slaughter.” Who doesn’t know the disappointment when it turns out that our faith doesn’t solve anything, doesn’t help, doesn’t serve anything concrete? That the fact we stand “on the right side” doesn’t guarantee a “happy end.” For the God Jesus calls his Father doesn’t grant victories but GIVES “ONLY” HIMSELF. He takes the side of the oppressed, but only as one of them – meaning to wake up the conscience of the oppressors by his vulnerability. In the “Passion” Judas finally understands this truth, which makes him sing the moving aria “Gebt mir meinem Jesum wieder” (“Give me back my Jesus”), which comes as tough from the other world, because the Evangelist had already told us about his suicide. (You can listen to it here beautifully sang by Walter Berry in 1971.)

And what about us? Do we see our faith as a sort of an “insurance” for ourselves, or are we able to accept that Jesus doesn’t want to be a Messiah who fights and conquers his (or actually our) enemies and grants victory to “our team?” Will we let him surprise, be truly different – as a Messiah for all – in order for salvation, in accordance with Isaiah’s prophecy, to reach to the ends of the earth, go beyond all limits and encompass all reality?

This entry was posted in English entries and tagged Lent, reflections, spirituality, theology. Bookmark the permalink.