If you don’t believe that I AM…

I was asked to write a reflection for the website tezeusz.pl (you can find info about it in English here) upon tomorrow’s readings. It is a part of their “online retreat” series for Lent.

The accustomed ears of the first listeners easily picked up from these words something that for us is no longer that obvious – the reference to the mysterious NAME OF GOD, 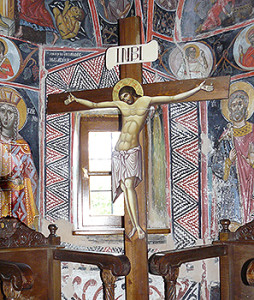 which resounded for the first time from the ‘burning bush’ when the Holy One revealed himself to Moses, sending him to lead the people out of slavery: JHWH – I AM…

In the course of the ages the NAME was made into a philosophical statement: ‘I AM WHO I AM,’ thus ‘I take my being only from myself’ or ‘I am being as such.’ It’s worth asking, however, of what use were ontological speculations to Moses? When a mission of liberation is given to someone, is their first need to look into the mystery of being? Or is it rather true, like some claim, that the basic message of the NAME was far more practical: God wanted to assure the one he sent that he would accompany him and the people in their upcoming wanderings through the desert? So: I WILL BE WHOM I WILL BE, I WILL BE WITH YOU EVER AS THE COMPANION OF YOUR JOURNEY, WHEREVER IT TAKES YOU!

In the ecumenical congregation where I’ve been ministering for almost nine years we finished yesterday another series of ‘household conversations,’ this time about ‘Where our faith has lead us?’ I listened for three consecutive days to stories of my ‘parishioners’ about their lives, experiences, choices and trials. The biggest impression made on me the question asked by a certain lady of about 80 years old: ‘It’s all very nice, but how can we EXPERIENCE it?’ From many conversations I had with her during the last couple of years I know that on the one hand she must be called a truly ‘spiritual’ person, and on the other she’s still struggling with what many mystics have gone through: ‘the dark night of faith,’ where ‘the heavens are closed’ and ‘God is silent.’ She existentially experiences that she is ‘from below,’ from ‘this world’ and doesn’t have immediate access to the other dimension of reality which she longs for. It is very easily to dismiss this experience with cheap, worn up declarations, but it can also be seen as a special gift which is supposed to open us up for a difficult mystery.

In St. John’s Gospel Jesus says ‘If you don’t trust (for such is the original meaning of the word ‘believe’) that I AM/WILL BE [WITH YOU], you will die, missing the goal (because to miss the mark/goal is the basic meaning of the word ‘sin’). I’ve believed for a long time that it’s not about the moment of physical death. One can also ‘die’ in the midst of life, losing faith in its meaning and goal. Jesus points to the fact that if we don’t trust that God is present in our lives, we will die – succumbing to the conviction of the pointlessness and meaninglessness of everything. But the words the Evangelist had Jesus say tell us something more. This presence is inseparably related to him. And here lies a good opportunity for all who would like to make these words into a weapon against others. ‘See,’ they say barely concealing triumph, ‘It was clearly said here that you have to believe in Jesus as the Son of God, the only Savior, the Second Person of the Holy Trinity!’ And faith understood as trust turns into faith consisting in accepting a bunch of doctrines into which the original existential experience was turned in the course of the Church’s history. Maybe that’s not the point? Maybe we should stop burdening the Evangelist’s words with all the meanings ascribed to them by dogmatics, and try to get to the original experience?

The original experience of Christianity is the experience of God’s closeness in the human being. Not in some special ‘sacred circumstances,’ not in ‘signs’ that make us fall on our knees in awe, but in the human being: the neighbor, one of us – Jesus of Nazareth. Of course, this experience was from the outset put into hundreds of different statements and ‘clarifications,’ which gave birth to what we call the church doctrine (and actually a whole series of mutually exclusive doctrinal statements of which some have been judged ‘right’ and some ‘false’). But the point is that we must not forget that it is not doctrine that saves. It is not doctrine that saves and liberates us, but the basic experience behind it, the experience of the closeness of the Holy One. A peculiar closeness, for… a human one. Not some exceptional – divine – one, but an ordinary, everyday presence of another human being, which was made real in Jesus of Nazareth for his disciples, and is still made real in everyone who reflects something of his life in their lives– consciously following his example or simply putting into practice his dream concerning us all, the whole reality – the dream movingly (though maybe a little too lofty for our taste today) expressed once by Karol Grycz-Smilowski:

He [Jesus] dreamed a beautiful vision of a new man and a new society that is finally aware of the spiritual foundations of being and doesn’t leave its dark caves of sinister systems in order to prey only, but will make its aim the highest of spheres.

But when we say that it was in him – this particular man from Nazareth – that God came as close to us as possible, we cannot forget what happened to him. ‘When you have lifted up the Son of Man, then you will know that I AM.’ The reading from the Book of Numbers gives us the first hint about what happened. The people wandering through the desert were being bitten by snakes.  The Lord told Moses to make a bronze snake and put it up on a pole. Everyone who looked at it was healed and lived. The story brings to mind the way sympathetic magic works, whose echo remains for example in homeopathy. But the word ‘pole’ brings too mine something else: the cross on Calvary. ‘Wait a moment,’ someone could say, ‘I’ve always thought that the cross was rather a tool of humiliation, degradation, and here it’s spoken of UPLIFTING/ELEVATION?’ I would like to quote here Fr. Jerzy Klinger, a renowned Polish Orthodox theologian untimely deceased in 1976:

In reality, if we consider their meaning as a ‘cosmic’ event, the Cross and the Resurrection make an inseparable whole in the New Testament … We find this truth expressed by St. John even better than by St. Paul when he speaks of the Passion of Jesus as the ‘hour’ of his ‘glorification.’ ‘The uplifting of Jesus is for John at the same time and in the same degree his elevation on the Cross and in glory.’

This intuition of John is movingly shown in icons. In them, the Crucified one is not depicted dying or already dead, as is often the case in the West. In icons Jesus is not dying but ‘dancing’ – already experiencing the ‘great mystery of faith,’ which proclaims that death never has the last word if you live like he did – sharing your life with others until the very end, making it nourishment for others. The Good Friday, remaining a tragic event, reflecting not only the fate of Jesus but of all who fall prey to ‘sinister systems,’ in its deepest sense already is Easter and the Ascension.

This vision corresponds to the experiences of first Christians. A few days ago I received the latest issue of the Dutch Mennonite journal ‘Doopsgezind.nl,’ and found there the article ‘Is Easter a Feast?’ The author writes:

The Christian Church of the first centuries was formed by a minority, often a persecuted minority. It didn’t have anything to celebrate except for the power of the crucified Christ. There was no glorious victory over anything, but a deep faith that Jesus, the Crucified Jesus, didn’t succumb to the might of the powerful. As we read in the story of Jesus’ temptation in the desert, he renounced egoism, riches, power. And thus gained the upper hand of the devil.

We have to do with an amazing paradox here. Jesus is victorious, because… there is no victory, at least not in the categories of this world. His victory, the only victory, is the moral victory of someone who shows with their life that we really don’t have to ‘leave the dark caves of sinister systems to prey only,’ that we can, in accordance with God’s dream, be human with others and for others, share our life, truly forgetting about ourselves and our egoistic interest. But such a victory is ‘celebrated’ only on the cross, for we have made the world a place where only the powerful and fit win, if only they use their power with skill…

Let us now try and combine this all into a picture. Jesus calls that we trust God’s NAME. That is, trust that the Holy One will be present in our lives, will accompany us in our journey. Yet this presence – contrary to what we may expect – is not the presence of a God who miraculously helps us solve our problems, but the presence… of a human being. God is present in the human way and no other. This is what we discover in the man from Nazareth: the humanity of our God. The God shown to us by the Scriptures, the one Jesus calls his Father, of whom he feels inseparable, actually doesn’t want to be God. His dream, his goal, is to be a human being – as human as possible. And there comes the time to take the last step: on the one hand logical, and on the other extremely difficult. It is this humanity, because it’s so fulfilled, complete, lived to the very end, to its limits, that leads directly to the cross. It finds its culmination in the cry: ‘My God, my God, why have you forsaken me?’ There is no God anymore – no  God of our expectations and dreams, a God who can be useful, solve anything for (and instead of) us. There is the loneliness of a dying man who confirms his faithfulness to humanity by his death – the humanity God dreamed of. The heavens are closed, God left his throne and allowed us to nail him to the pole of humiliation. Good Friday – with its stripped altars, the open empty tabernacle – is the peak of God’s revelation in our lives! And at the same time it reveals, more clearly than anything else, what being human is about: being thrown into this world without consent, torn by doubts, lonely and (sometimes) transcending loneliness by attempting to enter into a relationship with an other in the hope that it will finally be a long-lasting, profound relationship. For it is through this that our way to the ‘highest of spheres’ leads, whatever they mean…

No, what I wrote is not an answer to the question my ‘parishioner’ asked. These reflections I direct in the first place to myself. This Lent is for me a time I truly experience as wondering through the desert – of the painful necessity to abandon dreams and plans which have given meaning to my life the last couple of years, a time of returning to what I believed until recently I had left behind me for good. Everything is upside down. Nothing is as it seemed. What is left? Faithfulness to oneself and the hope that the void that surrounds me is the way God reveals himself in my life. A human God, weak and confused as myself, but faithful. For he cannot renounce his NAME…

This entry was posted in English entries and tagged Lent, reflections, spirituality, theology. Bookmark the permalink.