Old Catholics and Episcopalians:
Towards One Church in Europe

The following report from the Conference of the Convocation of Episcopal Churches in Europe, written by Matthew Davies, comes from the Episcopal Digital Network.

Old Catholics and Episcopalians in Europe have agreed to enter into deeper communion, seeking new ways to collaborate, preparing a common structure, and leading the way towards the ultimate goal of becoming one church in Europe. 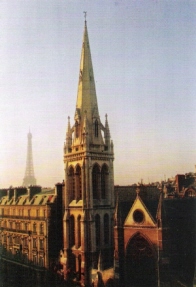 The Episcopal Cathedral in Paris

The Convocation of Episcopal Churches in Europe passed two resolutions during its Oct. 17-20 convention in Rome following a charge delivered by Old Catholic Archbishop Joris Vercammen, in which he encouraged the churches to “overcome our borders” and become “agents of transformation.”

One resolution commits the congregations of the convocation to seek to collaborate with their neighboring Old Catholic congregations by developing mutual ministries in worship, program and outreach, and by increasing knowledge and awareness of each other’s traditions.

Another resolution supports the bishop-in-charge of the convocation and the archbishop of Utrecht “in their joint efforts to foster and develop our common life in Christ.”

The Old Catholic Churches of the Union of Utrecht is the Episcopal Church’s longest-standing full communion partner, dating back to the Bonn Agreement of 1931.

“The work of full communion is meant for fuller communion than we can envision,” Vercammen told the delegates Oct. 18 at the convocation’s convention. “I hope I am able to seduce you to the freedom for which the Holy Spirit wants to open our minds.”

The Rt. Rev. Pierre Whalon, bishop-in-charge of the convocation, said that Vercammen had planted a seed “for us to pray about who we are together … [and to] determine that we no longer consider ourselves separate churches … We need to think outside ourselves.”

Whalon told ENS that there is a strong desire to form “a communion of churches that can have a common witness in continental Europe” and that such a communion would bring the Old Catholic Church and the Episcopal Church “as close as possible to full visible unity without giving up local autonomy of individual jurisdictions.” The deepening of relationships between Old Catholics and Episcopalians, he said, might encourage other Anglican churches and full communion partners in Europe to work more intentionally towards unity.

The Church of England’s Diocese in Europe also includes parishes throughout the continent. The Reformed Episcopal Church of Spain and the Lusitanian Church of Portugal are the two other Anglican jurisdictions in Europe.

“On the very long term it could be the aim to have only one ecclesiastical structure that would be really both Old Catholic and Episcopal,” Vercammen said. “For the time being we have to organize the steps we have to take in order to realize this long term goal.”

“I’m guessing the Old Catholics might help us to become new Episcopalians,” President of the House of Deputies the Rev. Gay Clark Jennings said in her address to the convention, meeting at St. Paul’s Within-the-Walls, an Episcopal church in the center of Rome. She described Vercammen’s proposal as “a radical form of community, a new way to be church, the church we’re called to be.”

Presiding Bishop Katharine Jefferts Schori, after hearing news about Vercammen’s appeal and the convocation’s response, told ENS that she is “deeply grateful for the growing awareness of the possibilities of full communion in Europe, and the increasing commitment to make it a greater reality.

“Imagine the missional witness and possibility of a seamless Anglican-Episcopal-Old Catholic-Lutheran Christian community!” she added. “The strong and deepening relationship between Old Catholics and Episcopalians in Europe is the forerunner, which just might lead other parts of the Body of Christ into greater partnership.”

Jefferts Schori was a guest of the Old Catholic Church in 2011 when she visited Utrecht anddelivered the Quasimodo Lecture, an annual event that explores issues of faith in contemporary society.

Vercammen, during his remarks to the convocation’s convention, quoted from that lecture, during which Jefferts Schori said that ecumenism “is basically housekeeping work – cleaning up the household, setting it in order, so that it can be a home … Ecumenical work begins in the baptismal vision of a restored body of Christ, but it cannot stop at any limited version of what God’s body includes. We are here to help the whole, and that’s the future I want to point toward in being catholic beyond borders.”

Following that lecture, Vercammen told ENS that more creativity is needed in dealing with overlapping jurisdictions.

“We need more concrete initiatives,” such as common searches for church leadership to serve across jurisdictions, he said, “and then we can really build a nucleus of church where Christians of all origins can come together. We have a unique opportunity and it would be a pity if we were not to use it.”

The Old Catholic Cathedral in Utrecht

The Episcopal Church entered into full communion with the Old Catholic Churches of the Union of Utrecht in 1934 on the basis of the Bonn Agreement three years earlier. The Old Catholic Church includes about 200,000 members in several national churches in Europe, located in the Netherlands, Germany, Switzerland, Austria, the Czech Republic, Poland, France and Italy [Where did the author take this number from?, dstp.rel.pl]. They separated from the Roman Catholic Church because they could not accept the definition of papal infallibility presented by the first Vatican Council in 1870.

The Convocation of Episcopal Churches in Europe serves a culturally diverse demographic of Christians in 20 parishes and missions throughout Austria, Belgium, France, Germany, Italy and Switzerland.

In addition to the Old Catholics, the Episcopal Church is in full communion with the Evangelical Lutheran Church in America, the Mar Thoma Syrian Church of Malabar, India, the Moravian Church in North America and the Philippine Independent Church.

Churches in full communion formally recognize that they share essential doctrines, including Baptism and Eucharist; agree to accept the service of each other’s clergy; and pledge to work together in evangelism and mission. The churches become interdependent while remaining autonomous.

We published several posts about Old Catholicism and its relations with
Anglicanism:

– Beyond Boundaries
–
The Union of Utrecht is 121 Years Old

You can read more about Anglicanism and Old Catholicism here.

Below a conversation between the bishop-in-charge of the Convocation of Episcopal Churches in Europe, the Rt. Rev. Pierre Whalon, and the Archbishop of Utrecht, the Most Rev. Joris Vercammen.

A concrete question comes to our mind, of course: what can the deepening of Old Catholic-Anglican relations, which we of course witness with joy, mean for the functioning of the Polish Episcopal Network? In Poland there is a church that has been a member of the Union of Utrecht for years, the Polish Catholic Church (the sister church of the Polish National Catholic Church in the USA, which is no longer a member of the Union), and another with the status of an observer – the Old Catholic Church of the Mariavites. May we hope for cooperation with those church communities in the future?