Faith that overcomes all fear of the future

Today is Thanksgiving: this ultra-American festival for whose roots – at least according to some – we should look in the place where I’m writing these words, the Dutch city of Leiden and the festivities commemorating the end of the 1574 siege (we wrote about this here). We hoped to taste an almost authentic “Thanksgiving lunch” for the first time in our lives at All Saints’ Waterloo, Belgium, our parish church, where it was held 10 days ago. We said we were going and sincerely intended to enrich the festive menu with genuine Polish marinated mushrooms (don’t you think they would be great with turkey?). Unfortunately, three days before that Sunday we received unexpected news from Cracow, which turned everything upside down and made us revise all plans we had – not only for the upcoming weekend, by the way…

Today I began the day listening to the sermon our dear friend, the Rev. Dr. Gregory Neal, preached last Sunday at his church in Irving, Texas.

It made memories from the wonderful trip we made through Poland only a little over a month ago with Greg come back, and especially a funny story related to Greg’s talk at the United Methodist church in Koszalin. Namely, a day or two after the talk, the pastor, the Rev. Sebastian Niedzwiedzinski, got a text from a Roman Catholic priest who listened to Greg, saying that he was disappointed, because Greg was supposed to talk about his travels, and spoke at least as much about the Eucharist. Well, there was a grain of truth in it (even though there was a lot about travels), but when Sebastian told me about that reaction, I thought the problem was not so much in what Greg said as in the fact that that priest didn’t expect it at all. How come? A United Methodist minister talking about the Holy Communion and its central place in his personal spirituality? Even more, he cannot be understood in the framework of the assumption which at least some listeners certainly made (Protestantism = a “symbolic approach” to Communion), and talks with deep conviction about his faith in the REAL PRESENCE OF JESUS CHRIST IN THE SACRAMENT OF THE ALTAR. And finally, as though there weren’t enough surprises, you could conclude from his words that his faith doesn’t only consist in accepting (perhaps a little by force) a certain doctrine, but constitutes a living element holding together his spirituality, giving direction and meaning to his life. This goes beyond the popular image of 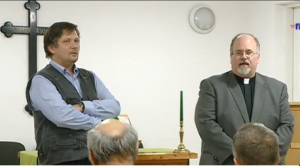 Protestants in the eyes of most Polish (and not only) Catholics.

Leaving aside this concrete memory – as funny as it was instructive (for it shows how much we have to do with regard to sharing knowledge about the Anglican approach to the Eucharist, which is also the root of the Wesleyan approach at the base of Methodism, even if many Methodists don’t realize this!), Greg’s sermon inspired another reflection in me. Most of us remember more or less the story about manna from heaven, which Israelites ate on their way through the desert. Greg reminded an important element of the story. Namely, manna was supposed to be collected only for a given day (unless the following day was Sabbath – then you could collect twice as much, because work on Sabbath was prohibited). Otherwise the “bread from heaven” would spoil. I suddenly realized how difficult it must have been.

Since a few days we have a more or less regular furry guest. It’s Mr. Salmon, a street cat, called so because of his special fondness of that treat… Mr. Salmon is a quiet and well-behaving cat  – you can tell at once that he hasn’t spent all his life in the streets. He surely had a home once. Yet daily struggle for survival has also left marks on his behavior. One of them is that he immediately eats everything you give him regardless of the amount, undoubtedly because life has taught him that you never know when the next meal will come. Looking at how greedily he eats, I realized that I often do likewise. Perhaps not always with regard to food (even though I sometimes eat more than I should), but other important things.

I was taught as a child that the characteristic of maturity or adulthood is thinking about tomorrow: planning, anticipating consequences of one’s actions, readiness to take them upon oneself. Alas, there is a side effect of this attitude: I feel especially helpless when consequences of certain decisions cannot be predicted, when the future is completely unclear and you simply have to have trust. I would like to collect as much manna from heaven as possible – for storage. In order to show how foresighted, careful I am (even though I like to be seen as a risk taking and spontaneous person!).

I act like this in private life, but also as coordinator of the Polish Episcopal Network. Only a few weeks ago it seemed to me that for such a young community, which necessarily has to improvise a lot, we have taken care of basic things quite well. The passing of Br. Pawel changed this dramatically. As we were updating our flyer yesterday it occurred to me that we cannot write anymore that there are monthly Eucharists in Cracow, because we simply don’t know that…

On the other hand we too have our share of manna from heaven. Cooperation with the 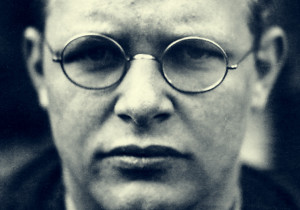 Wacław z Szamotuł Vocal Ensamble and its conductor, Lukasz Laxy, is developing very well. We will most probably be able to hold a traditional Anglican Service of Nine Lessons and Carols. Only a few month ago I thought it would be impossible to organize in Poland. And for January we plan a conference for local leaders – among others, Bishop Pierre Whalon promised to come, which means that there will be an Episcopal Eucharist in the royal city. Yes, we don’t know if there will be one in February, which seemed “sure” until recently (at least as sure as it could be when based on an enthusiastic but ill man who were to turn 90 soon), but that’s the point! This is the trial the Israelites faced in the desert: to trust that manna will fall again the following day.

In the legacy of Dietrich Bonhoeffer, Lutheran theologian and a member of anti-Nazi resistance movement, there is among other things the following confession of faith:

I believe that God can and intends to let good spring from everything, even from what is most evil. For this he needs human beings, who desire to turn all things to the good.

I believe that God purposes to give us in every crisis as much power of resistance as we need. But he does not give it to us in advance, in order that we shall rely not on ourselves, but on Him alone. Such faith will necessarily overcome all fear of the future.

I believe that even our defects and errors are not in vain and that it is no more difficult for God to deal with them than with our supposed good deeds.

I believe that God is not a timeless phantom, but rather that he waits and responds to true prayer and responsible actions.

This text was in my mind when I was writing many posts for the blog, but I think I never referred to it directly. Why? Because it is very difficult for me. Intellectually I agree with it and I would like very much to say those words as my own confession of faith, but I know that they surpass what is there really in my soul now. Do I really believe that “God purposes to give me in every crisis as much power of resistance as I need. But he does not give it to me in advance, in order that I shall rely not on myself [and my “adult” foresight], but on Him alone?” I once heard from a friend that God gives us precisely as much ability to see and foresee things that we may come to the next corner on the path of our lives, around which another challenge lurks. And not an iota more. And it is our task to learn and accept this, because it’s what faith consists in – the faith that overcomes all fear of the future.

I very often find it irritating when people treat faith as a rigid, unchangeable worldview, a list of answers to all possible questions, ready-made solutions to all possible problems. Today, however, the question comes to my mind whether at the base of my irritation there isn’t perhaps a little longing for this attitude? Whether I wouldn’t like to “have faith” 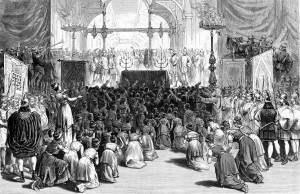 (which itself sounds awfully, even if it’s a Biblical expression), which would make me see more, reach a kind of “certainty” anew. To live of the “bread of heaven” and really collect not more than enough for one day is truly difficult, even though experience tells you that the bread has been there just when you needed it. But you would like to collect more – for storage, just in case…

Today is not only Thanksgiving. Our Jewish brothers and sisters are beginning their celebration of Hanukkah. Hanukkah commemorates the miracle of the lights that happened in the times of the Maccabees. When the Jerusalem Temple was regained from the hands of the enemy, only one little lamp with kosher oil was found inside, with enough oil for only one day, but it miraculously burned for eight days – until new kosher oil was produced and the Menorah lit. When we read about Biblical miracles, we often ask if “they really happened.” But – as Talmud says – “there is no before and after in the Torah”, so we should ask this question – at once – in all possible tenses. And what will be the answer? My own answer? Perhaps: “I believe, Lord, help my disbelief!”?